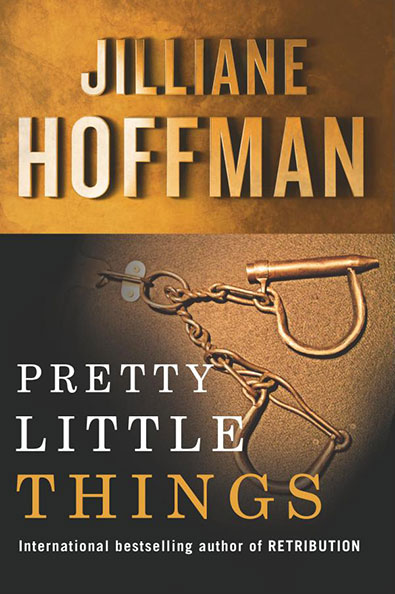 Thirteen-year-old Lainey Emerson is the middle child in a home police are already familiar with: her mom works too much and her stepfather favors his own blood over another man’s problems—namely Lainey and her wild older sister, Liza. When Lainey fails to come home from a Friday night out with friends, her disappearance is initially dismissed by the Coral Springs P.D. as just another disillusioned South Florida teen running away from suburban drama and an unhappy home life.

But Florida Department of Law Enforcement (FDLE) Special Agent Bobby Dees, who heads up the Department’s difficult Crimes Against Children Squad (CAC), is not quite so sure. Nicknamed “The Shepherd” by colleagues, he has an uncanny ability to find the missing and bring them back home—dead or alive. After a search of Lainey’s computer and a frank talk with her best friend reveal the teen was involved in a secret internet relationship, Bobby suspects she may be the victim of an online predator. And when chilling evidence of other possible victims is sent to a Miami television station, he fears she may not be the only one.

The faceless monster from cyberspace who has gone to remarkable lengths to stay invisible now seeks a captive audience. And it’s Bobby Dees he wants watching. Haunted by the still unsolved disappearance of his own teenage daughter, Bobby will find himself pulled into a deadly game of cat and mouse with the most prolific killer he’s ever encountered. But will he be able to save Lainey and the others before it’s too late?

“It seems the latest plot lines in the suspense/thriller genre is missing children. And rightfully so: for what could be more horrific than an abducted child, or more suspenseful than the search for the abductor? Having said this, Hoffman has managed to take this already-done scenario and give it a well-done brand new twist.

When 13-year-old Lainey does not come home from a night out with friends, her parents and local police seem unconcerned. Lainey’s older sister had a history of running away, and everyone believes this tendency seems to run in this family. But Florida Department of Law Enforcement (FDLE) Special Agent Booby Dees, who heads up the agency’s Crimes Against Children Squad, sees something else that sets off his cop-radar.

This is Hoffman’s best work ever. And yes, it is better than Retribution! In an era where authors are shying away from the technology of cell phones, internet, forensics, etc., by setting their books in the 1980’s and 90’s, Hoffman steps up to the hi-tech mountain by devising a plot based on chat rooms and internet anonymity. And she does it in an uncomplicated, highly readable style.

Highly recommended to both the Hoffman fan, and as an introduction to this talented writer.”
– Joanne Sinchuk of Murder on the Beach Bookstore

“PRETTY LITTLE THINGS by Jilliane Hoffman: When thirteen-year-old Lainey Emerson meets Zach online, she thinks he’s the perfect guy. Nevermind the fact that he’s a senior in high school, he’s hot and he seems interested in her. Lainey’s only worry when Zach suggests they meet in person is that the high schooler will discover her real age. Two days later, Lainey’s mother reports her missing. Bobby Dees, an officer with the Crimes Against Children Squad, is called in to investigate. Though most are sure Lainey is just another teen runaway, Dees is not convinced. Turns out he’s right and the case is much more complicated than anyone imagined. Soon a killer begins sending personal messages to Dees, messages that include gruesome clues linking more missing girls in the area to Lainey’s case. This latest from Hoffman is an intense thriller about a very timely subject. I don’t know if there are any plans for more Bobby Dees stories, but I could easily see this developing into an intense series with lots of possibilities. A definite recommended read for thriller fans.”
– Becky Lejeune of BookBitch.com

A small, portly man in a white suit, deep purple shirt and patent slip-ons ran around the stage with a microphone in hand, reaching out to touch any one of the hundreds of sweaty palms that waved back and forth before him in the Unity Tree of Everlasting Evangelical Life church auditorium. He slicked back a thick band of gelled gray hair that had broken form and swooped down across his forehead and over his eyes. The amazing camera work practically let you count the fine lines in the preacher’s full face, the beads of perspiration rolling off his red cheeks and down through layers of neck fat.

“Now when Moses went to meet the Israelites after their victory over the Midianites,” the preacher boomed as he worked the stage from one end to the other, “he had all the princes and the priest, Eleazar, with him. And he sees what? What does he see that the Bible tells us made Moses so incredibly angry? He sees women!” The crowd, which looked to be made up of mostly females, booed loudly.

Seated in front of the living room TV in his worn, comfortable La-Z-Boy, the man nodded along with the church audience, watching the drama unfold on his television screen as though he had not already seen this video a hundred times before.

“The Israelites have saved the women!” the preacher boomed. “And Moses, well, he says, ‘So you’ve spared all the women? Why? Why, when they’re the very ones who have caused a plague to strike the Lord’s people! Why did you spare them?’”

Somewhere in the church audience, a female yelled, “Because they were men!”

The man wiped his sweaty palm on the recliner’s worn armrest, nodding enthusiastically at the preacher’s words.

“They were weak!” the preacher continued. “And so these weak men spared these vile women who had wreaked havoc on their tribe. But Moses is not just upset, ladies and gentlemen. He doesn’t just say, ‘That was a stupid thing to do!’ and leave it at that. No. Moses knows what will happen now that these vile women have been saved. Their delicious scent and their warm skin and their soft curves will soon sway their captors. Wickedness takes on many forms, folks. Many forms.”

The preacher summoned a young woman in the church audience then by pointing at her. She couldn’t have been more than seventeen or eighteen. “Come on, child, come on up here.” Encouraged by her parents and the enthusiastic crowd, the girl hesitantly climbed on stage. “Look at how beautiful she is,” the preacher said, walking around the slight figure with his arms outstretched, as if she were an animal on a pedestal in the circus and he was the ringmaster introducing her to them. He sniffed exaggeratedly at her and smiled. “She smells good. She sure looks good. She doesn’t seem evil. What man would not be tempted?” He turned back to the crowd. “Like many of us in our everyday lives, Moses must make a difficult decision. A terrible decision. One that many will find objectionable, but yet Moses – well, Moses knows it is necessary. A difficult choice, but a necessary one.”

A pregnant hush fell over the crowd. “What does he tell them?” the preacher asked his flock, staring as he did right into the eye of the camera, speaking to the thousands of lost sheep all across the country who waited on his every word. “What? He tells them – and this is right out of the Holy Bible, folks – he tells them, ‘Slay, therefore, every male child and every woman who has had intercourse with a man. But you may spare and keep for yourselves all girls who had no intercourse with a man.’ What does that mean, folks? ‘Only the young girls who are virgins may live,’ Moses says. ‘Only the virgins can live amongst your people. Only the virgins, those who are pure in thought and deed, can be saved.’ Why? Because they are pure. They have not been corrupted.” He looked back at the young girl on stage and bellowed, “Tell us, young lady, are you a virgin? Are you pure in thought and deed? God is watching you! Remember that! We are watching you! Are you pure in both thought and deed?”</p?

The girl nodded as tears ran down her cheeks. She smiled at the preacher and then out at her parents. “Yes,” she answered. “I am pure.”

The man wiped his palm again on the easy chair. The preacher certainly was mesmerizing. He had the crowd eating out of his hand. Had the young virgin not been so pure, he would have had no problem rousing the masses to stone her, if that was what he so wished.

The man pressed rewind on his remote, and while the tape noisily chortled in the VCR, he unfolded the brown canvas bag on his lap. He ran his fingers over the soft brush tips inside, finally selecting a flat bristle and his dull painting knife. He picked up his artist’s palette from the side table and slowly mixed his palette of carefully selected paints. The heavy scent of the oils was intoxicating. The tape started again from the beginning. As the preacher took to his stage, the people hailed him as though he were a general coming back from war. As if he was the Messiah himself.

The man listened to the sermon one last time as he worked the final touches on his latest piece, finding the raw energy of the preacher’s words to be as soothing and stimulating as a surgeon might find listening to classical music in the OR.

“Like many of us in our everyday lives, Moses must make a difficult decision. A terrible decision. One that many will find objectionable, but yet Moses – well, Moses knows it is necessary. A difficult choice, but a necessary one. What does he tell them? What?”

When he was done, the man turned from his work and put his brush into the turpentine mixture to soak. Next to the TV was his computer. He got up from the La-Z-Boy and moved to the swivel desk chair. His hands were shaking just a little as he rubbed a stubbly five o’clock shadow with fingers that were still wet with paint. On the screen before him, the pretty girl sat on her pink bed in her pink bedroom, surrounded by movie stars, pirates, and vampires, chatting on the phone while she tried to paint her toenails.

“He tells them, ‘Slay, therefore, every male child and every woman who has had intercourse with a man.’”

The man licked his lips and swallowed hard. For just a second he felt ashamed, wondering why it was he thought the things he thought. But it was too late to get a conscience. Neither his thoughts nor his deeds were pure. His soul was already damned.

“‘But you may spare and keep for yourselves all girls who had no intercourse with a man.’”

He typed something on the computer and hit ‘send,’ then watched as the pretty girl hopped off the bed and hurried with a smile across the room to her computer.

It was a simple question, but it had certainly gotten her attention, hadn’t it?

Pretty Little Things is available where all books are sold and at these and other fine online bookstores: