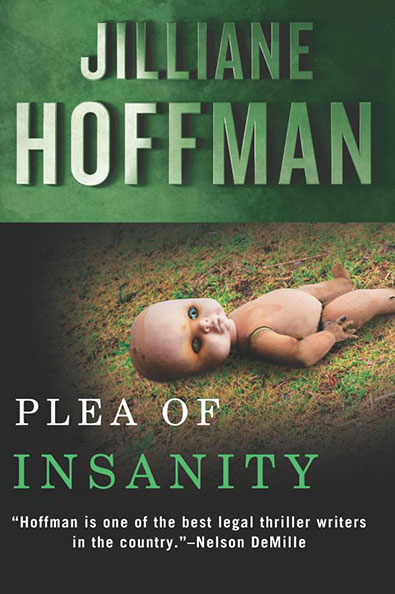 Before I began my career as a Miami prosecutor, an unthinkable tragedy befell the family of a close friend whose sibling had been diagnosed paranoid schizophrenic. While in the throes of a psychotic delusion, a horrific crime was committed, and in a fragile instant, lives were forever tragically changed. My friend’s heartbreaking story haunted me for years, inspiring me to write the ultimate psychological thriller: Plea of Insanity.

Some fear madness. Others choose it…

Julia Vacanti is a young, ambitious Miami prosecutor who can hold her own in a courtroom full of good old boys. Assigned to a hectic trial division with an ornery, sexist judge, just getting through the day can be a challenge. When she’s asked by the Assistant Division Chief of Major Crimes to second chair a murder case that could make or break her career, she doesn’t hesitate to jump on board.

The defendant is a successful surgeon. The victims are his wife and small children. The plea is Not Guilty By Reason of Insanity. The perfect father and husband, David Marquette seemingly just snapped one night. Or did he? His defense team claims schizophrenic delusions drove him to slaughter his whole family. But the state suspects Marquette’s insanity defense to be the carefully fabricated work of a deviant psychopath, crafted to disguise murders that were calculated and cold-blooded.

If convicted, Marquette faces the ultimate penalty – death. If found insane, he could walk free. To bring a killer to justice, Julia will have to venture into the mind of madness herself, embarking on a journey into her own past – something she has struggled for to forget for fifteen years. And this will lead her to confront a future so chilling, she’s not sure she will ever be able to face it…

“Plea of Insanity confirms Jilliane Hoffman as a major thriller-writing talent at the peak of her powers.”

“Guaranteed to follow in the best-selling footsteps of Patricia Cornwell, Kathy Reiches and Karin Slaughter”
– Guardian

“Hoffman writes like an angel. Outstanding”
– Independent on Sunday

The old, two-story Spanish house sat back away from the street, nestled behind lush tropical foliage and towering palms. Halloween decorations dotted a manicured lawn, where a six-foot, hooded Grim Reaper waited menacingly to scare trick-or-treaters from a flowerbed filled with impatiens. Homemade ghosts with magic-markered black eyes dangled from the branches of an oak, twisting in the gusty breeze that had come in overnight, courtesy of an early-season cold front. In the moonlight they glowed an odd, bright white. Somewhere up the block a dog barked, as night yawned toward morning.

The short whoop of a police siren broke the sleepy quiet as it turned onto Sorolla Avenue from Grenada. Rookie Coral Gables P.O. Pete Colonna ignored the long cobblestone driveway and instead pulled the cruiser over at the curb. Stepping out of the car, he surveyed the house for a moment and then made his way up the winding brick walkway to the front door, past scattered sticks of sidewalk chalk and an abandoned tricycle. When he spotted the little bike with silver racing stripes he moved just a little faster. He rang the bell and pounded on an impressive mahogany front door. Obviously a big money house, he thought as he knocked. He could hear the loud chimes inside, but no one answered.

“Stand by, 8362.” After a moment the dispatcher with the Coral Gables P.D. came back on. “Bell South’s checked the line. It’s open, but there’s no convo. They’re not getting an answer.”

“I don’t hear any ringing inside,” Pete said, putting his head close to the door. “I’m not hearing nothing in there.”

The voice of his sergeant crackled to life on the radio pack. “8362, this is 998. Go to channel two.” Channel two was the talk-around channel, where you could speak without going through dispatch. Pete switched over. “G’ahead Sarge.”

“What’ve ya got?” asked his sergeant, Ralph Demos.

“I’m checking the residence,” Pete said as he moved off the porch and about the front yard, parting the elephant ears and traveling palms that hid too many French windows from sight. “There’s no evidence of a break-in that I can see, nothing broken, but…” he hesitated.

“What was the call?”

There was a pause. “Alright. Trust your gut. I’ll come now then.”

“The hell you are. Stand down. Wait for me,” his sergeant said sternly.

Pete looked through shrubbery that hid a black iron fence and back gate. Forgotten toys drifted lazily across a still pool. A wooden swing set the size of a small house sat on a patch of perfect grass. “Kids live here,” he said. Pete’s wife was pregnant with twins. In just a few weeks he’d have two little ones of his own.

“Wait for me. Don’t go in there alone, Colonna. You may find a confused homeowner with a shotgun in hand that didn’t hear the doorbell. 10-23 for back-up. I’m there in five.”

Pete clicked back over to dispatch. His sergeant’s voice radioed in. “998 is 10-51 to 8362’s location from UM.” UM was the University of Miami. The campus was only a few miles away.

Pete checked the rest of the ground floor windows and the backyard sliding glass doors before walking back around to the front of the house. Next to the tricycle he spotted a spilled tub of sidewalk chalk. The black night sky had begun to warm to periwinkle and the birds hidden in the oak tree started to wake up and chirp in the soft darkness. He tried the front door again. Still no answer. A cold, anxious feeling spread through his bones as he waited on the porch.

It seemed like a lifetime, and definitely more than five minutes, before he saw the squad car pull down the street and park at the curb. Sergeant Demos was a large man, and with just weeks to go before his retirement party, things moved at a slower pace for him, both physically and mentally. It was another minute before the car door finally opened.

“Still nothing, Colonna?” Ralph asked with a huff as he lumbered up the walk.

Pete nodded. “Dispatch said it sounded maybe like a kid.”

“Yeah, yeah. Could be a prank,” Ralph said, scratching at his head as he looked up at the dark windows on the second floor. “Great. Everyone’s in bed except for junior. Kid’s sweating it out right now, watching us from behind Bugs Bunny curtains.”

“Line’s alive, but no ringing. No one’s answering the door. I got a feeling, Sarge.”

“You and your feelings. I got a feeling you’re looking for some OT, pay down the college fund for those new babies you got coming.” The sergeant used his asp to bang on the door. “Police! Anybody home?” After a moment, he looked at Pete again. “Any history on the house?”

“Homesteaded to a Dr. and Mrs. David Marquette. Dispatch didn’t say nothing about a history and I know I ain’t been here before,” he said, looking around at the stately homes that lined the block. “Nice hood.”

“Actually, I think it was Brentwood.”

“Same damn difference. The point I was trying to make was domestics happen everywhere. You’d do good to remember that.” Ralph sighed. “A little kid? All right. Minimal damage. Take the pane. The city’s paying for it, so don’t go Rambo.”

Using his flashlight, Pete broke out one pane of the frosted, etched glass that framed the front door, reached in and unlocked the lock. If it was a kid messing around, he was probably shitting his drawers right about now.

Twenty-foot ceilings loomed over an elegant living room. A staircase zigzagged alongside a wall and an ornate iron railing stretched across an overhead balcony. Past the balcony and down the upstairs hallway Pete could see a light was on. “Police!” he yelled.

They moved quickly through the first floor rooms. Laundry sat piled on a washing machine and toys cluttered the family room. In the kitchen, cleaned baby bottles were lined up neatly next to the sink on paper towels.

Pete stared at the bottles. The house was too quiet. Someone should be up by now. Either they had the wrong house and no one was home, or…

Pete ran for the stairs, taking them two at a time. Behind him he could hear the labored breathing of his sergeant as he tried to keep up; the jingle of the cumbersome equipment belt under the sarge’s belly, the heavy click of his heels on the stone steps.

Dull yellow light spilled softly onto the landing from a back room whose door was partly closed. A nightlight? Family pictures smiled at him from every angle. All the other hall doors were shut tight.

“Anything?” called Ralph, still on the stairs.

Pete moved slowly toward the open door, snaking his way along the wall. Select pieces of the room slowly came into view. Butterflies danced across a purple wall. A Hello Kitty mirror. The edge of a Disney Princess comforter. “Kid’s room,” he called out.

“What the fuck did you step in?” Ralph asked suddenly.

Pete turned around. He shined his flashlight where he’d just walked. Dark smears that looked like footprints followed him down the carpeted hall. He slowly spun and looked at the floor in front of him. Small red puddles with the sheen of fresh paint stained the mint green hall carpet. Only Pete knew it wasn’t paint he was staring at. He moved his flashlight about. Tiny red droplets splattered up on the white baseboard and onto crayoned yellow walls.

“Jesus Christ!” Ralph exclaimed. The sergeant stumbled back, his large body hitting the wall with a thump.

Pete wanted to stop. He didn’t want to see anymore. A sick feeling churned his stomach and sweat dribbled from his upper lip, for instinctively he knew that what he was about to witness was something he would probably spend the rest of his life trying to forget. He took a deep breath and pressed his head against the wall, his firearm out before him at the ready. His hands shook and he thought of his wife, Victoria, and the two perfect, innocent babies he had not yet met. From the sonogram he knew they were both girls. “Police!” he shouted again, struggling to hide the tremble in his voice.

Then he entered the room and completely fell apart.

Plea of Insanity is available where all books are sold and at these and other fine online bookstores: